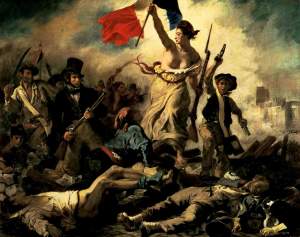 Naked activism by many women around the globe has provoked a strong response in the media from social commentators and academics, many condemning this tactic as some form of forced western imperialism and superficial shock tactics. In many of the arguments mounted against FEMEN, many critics have stated the right of those within cultural and ethnic groups to practice and demonstrate within their own “culturally acceptable” confines.

But what if, it is those very confines that are oppressing women in the first place?

Are we to believe that women who are forced to dress and behave in a certain way, be they Indian, Muslim, Jewish or Mormon should also protest whilst maintaining the very same dress and etiquette they are protesting against?

History has shown us that women have protested and resisted patriarchy in remarkably radical ways. The baring of the breast is not a violent act, nor a radical one. In fact the bare breast is either taken as a form of erotica or nurturing of another. The woman is not the “owner” of her breast, it is a societal appendage for the pleasure and service of others. Perhaps that is why when women are claiming it back and using it as a tool for activism and placard for protests that society has had such a “shocking” wake up call.

Women in every society, religion, culture, and ethnic group  (in varying degrees) do not have the liberty or freedom to exercise their own rights. They may be painted as willing participants, but who has truly asked a girl in a full length burqa pushing a pram in 42 degree heat what her true preference were? A true preference, if her decision was not influenced by social, religious and cultural backlash and ostracism.

Religion has always wielded its heavy stick of doctrine and behavioral codes on women’s bodies through blackmail, guilt, and in many societies religious laws that can result in death for a women who dares to non-conform. If these societies are truly worthy of the international respect and kow-towing that many feminist academics and activists are offering them, then how is it that a simple act as baring breasts is being met with such fierce consequences as to leave the woman in question fearing for her life? If we are not able to recognize that as the true face of oppression, then I am afraid we are just as guilty of the misogyny we espouse to be against.

Gate keeping by feminist academics  and activists is breathtaking; many critics are starting to sound a bit like disgruntled long term employees of an institution where a young relatively in-experienced new employee gets a greater attention. Are some of these authors upset at the significant media spotlight and public awareness that FEMEN and its actions are attaining?

Rather than retaliating under the thinly veiled argument of “cultural sensitivity” isn’t it more important to realize and take stock of their own progress and see if things can be done differently?  I am not saying that everyone should or shouldn’t be protesting via nudity, however the right to do so should be allowed, and rather than howling down the protestors, perhaps understanding the underlying message and reaction?

There is a significant stench of international diplomacy that is wafting through the current arguments against FEMEN and its supporters. It is of course in the interests of all countries in significant economic and trade agreements with culprit nations to maintain a degree of cordiality in their relationship.

Is it perhaps an attempt to portray an implicit support and agreement with these countries that our own Western media is publishing articles that condemn FEMEN without exploring the more important issues that are being uncovered, that of the patriarchal and state sanctioned oppression that operates within these societies ?