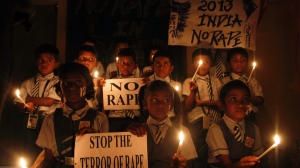 Almost a decade ago, when I was 18, I was gang raped by seven men in a moving vehicle. When I came back home, it took me three days to breakdown. The reasons: I was too young and confused to understand what had happened. I was also living away from my family in an entirely new (metro) city with new values and tempo of life where no one really cared what happened to another.

What followed were flashbacks, anxiety and depression. These supposedly are the normal reactions to sexual abuse. For years I did not speak out. I did not fight. Now I choose to speak out. I choose to fight. The recent Nirbhaya episode that brought the nation together reminded me of my trauma and I realized depression, suicide and anxiety don’t define a rape victim’s life. I also realized other woman have gone through and are going through what I experienced and my long journey towards “finding myself” may help others. I realized that I was suffering from complex Post Traumatic Stress Disorder and that I could get my life back. I decided to fight the demons in my mind.

I took psychiatric help and now I am a professional woman, who struggles everyday to lead a ‘normal’ life, trying to come to terms with what happened a decade ago. ‘Normalcy’ is also already defined, isn’t it? With so many abused victims in India, I wonder how not being an abuse victim is ‘normal’, not undergoing some kind of violence is ‘normal’? While those like me are considered to have experienced something ‘unique’; we are treated as ‘exceptional’?

Conditioned by societal values especially in a small town, for a long time I felt that I was an immoral person. That in some way my “immorality” had made me responsible for the rape. At times I felt that I should act out the role of an “immoral person”. That I deserved in some way to be abused and humiliated. I would seek out relationships with abusive men as I felt that I deserved this. This lead to intense mood fluctuations. I wanted to forget the whole world and get trapped in a situation of powerlessness. When I realized what I had done and what I was doing to myself, I had intense shame, guilt and suicidal tendencies.

This confusion resulted in complex post traumatic stress disorder (Complex PTSD). To quote Bessel A. Van der Kolk a leading expert in this field. “Persons with Complex PTSD can develop strong emotional ties with people who intermittently dominate, humiliate and, threaten them. This leads to confusion between pain and love and causes enormous suffering. Anger directed against the self or others is a central problem. This leads to a repetitive re-enactment of real events from the past. Repetition of the trauma may provide a temporary sense of mastery or even pleasure. This ultimately perpetuates chronic feelings of helplessness and a subjective sense of being bad and out of control. Gaining control over one’s current life, rather than repeating trauma in any form, is the goal of healing.”

Persons with complex PTSD may have many of the following symptoms:

Unless the person tells a therapist about her problems she is labeled as suffering from anxiety disorder, depression, bipolar disorder or schizophrenia. The persistent lack of trust leads to failure to trust a therapist for fear that he/she will disclose personal details to others. The person goes from one therapist to another getting a different diagnosis each time.

I had many of these symptoms. I was lost. My family could not understand and I dared not tell as it would unsettle the peace of ‘home’. I also could not share my problems with them because of shame and guilt. It was a vicious cycle I could not break out of.

I consulted many psychiatrists (and there is still stigma in India when people do that!) but could not share my past with them. It took me three long years to finally share my past with a therapist whom I learned to trust. I also joined the discussion forums on National Alliance of Mental Health (NAMI) (www.nami.org) and got to know that there are many women like me who have also struggled hard to lead a normal life post sexual abuse. I made many virtual friends. I don’t know their faces but we have all formed support groups for victims who want to live and lead a normal life. I also read about Rape Trauma Syndrome and decided to move ahead in life forgetting about the past and developing positive coping mechanisms.

In India, rape is a strong word and because of traditional and cultural norms, most of the rapists walk free. Women don’t come forward to lodge an FIR because they fear it would ruin their family reputation and their social standing would be adversely affected. I hope the Nirbhaya protests inspire more women to come out and seek support. I wish to share my story also in the hope that we can all fight together. I truly believe that if I was part of a society that offered support to rape survivors, their families and stigmatized perpetrators instead of the ‘victims’, I would have recovered long time ago.

It is more than ten years now since I was gang raped but I survived. I did all that I could to fight the demons in my mind. Yes it was not easy. Everyday I would burst into tears because the men who raped me were never caught. They walked free and this sometimes results in extreme anger. Justice for rape as a crime and punishment for perpetrators would go a long way in the healing of those assaulted. The men who violated my body years ago were violating my mind every day and I wish justice was done. I still feel scared, cry at times but life has to go on.

Suicide is a permanent solution for a temporary problem. Life has to go on. Consult a psychiatrist and take medication if you need it. Don’t make the mistake of refusing medication . Fighting rape is only part of the problem, fighting stigma in the aftermath is the more important thing. Even a basic need to get counseling and psychiatric help is stigmatized in India. But fight we must. There is no other option, for life is indeed beautiful to be destroyed by one crime committed against us. Unlike Nirbhaya, (whose life was cut short so brutally), I have the privilege to be alive and I can only be grateful. After all tomorrow is another day.

3 responses to “Tomorrow is another day”