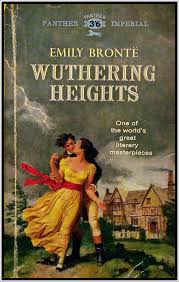 I don’t like it when you break me honey

Why’d you have to do that?

Tell me when you make these tears keep fallin’

Figure figure, there’s no working you out whatsoever

Only one way I could sum you up all together

You’ve got a black heart

Daddy I’ve fallen for a monster

Somehow he’s scaring me to death

Ah yes he is

Mamma he’s the best I ever had

Daddy I’ve fallen for a monster

He got a black heart

But we can’t blame this all on pop culture.  Wuthering Heights is considered one of the great classic romance novels taught at the early high school level (recommended age is between 13-16 years old).  Worryingly, this is how Emily Bronte’s classic is described on amazon.co.uk:

Wuthering Heights is a wild, passionate story of the intense and almost demonic love between Catherine Earnshaw and Heathcliff, a foundling adopted by Catherine’s father. After Mr Earnshaw’s death, Heathcliff is bullied and humiliated by Catherine’s brother Hindley and wrongly believing that his love for Catherine is not reciprocated, leaves Wuthering Heights, only to return years later as a wealthy and polished man. He proceeds to exact a terrible revenge for his former miseries.

The action of the story is chaotic and unremittingly violent, but the accomplished handling of a complex structure, the evocative descriptions of the lonely moorland setting and the poetic grandeur of vision combine to make this unique novel a masterpiece of English literature.

How do we think it’s acceptable to teach ‘demonic,’ ‘violent,’ and vengeful love to teenagers and believe that it does not contribute in any way to relationship violence?  According to the UK Home Office, 33% of teenage girls and 16% of teenage boys reported sexual abuse in a relationship and 25% of girls and 18% of boys reported physical abuse (Home Office).  Similar statistics can be found in the US: 1 in 3 teenagers experience some form of abuse in a relationship; 1 in 10 experience physical abuse; scarily, 70% of university students report sexual coercion (loveisrespect.org).  And, yet, somehow people across the globe still swoon over Heathcliff and teach others to swoon as well.

And if you’d like to dismiss this because these are just romance novels, let’s reflect on Jason in Greek mythology.  Knowing that Medea is a powerful sorceress, Jason uses her power for his own gain—to get the Golden Fleece that will restore his kingdom to him.  He isolates her from her family.  For him, she severs her relationship with her father and kills her brother.  According to Euripides, after accomplishing what he wants, Jason moves on to another more powerful woman, leaving Medea with their two sons.  While Medea’s murder of their sons is horrific, how does Jason get written as the hero and Medea as the monster?  In Edith Hamilton’s Mythology (1940), Medea says to Jason,

I saved you.  Every man in Greece knows that.

The bulls, the dragon-men, the serpent warder of the Fleece,

I conquered them.  I made you victor.

This passage has haunted me since Laura and I wrote Mothers, Monsters, Whores.

It is not a surprise that the summer of mis-romance followed America’s War on Women or Berlusconi’s bunga bunga culture or, even say, Ancient Greek patriarchy.  Or that it paralleled the events now highlighted in the US Department of Defence’s report on sexual abuse in the military during fiscal year 2012.  It reports that sexual assault in the military (seemingly) rose by 19,000 in one year to 26,000.  This was released just days after the officer in charge of sexual violence intervention programs in the Air Force was arrested for sexual battery.  These events—these security issues—come on the heels of Valerie Hudson et al.’s work to examine how women’s precarity in a given society is related to that state’s engagement in conflict (2008-9, 2012).  Thus, women’s security is scripted as security with a capital S—not that feminists haven’t been saying for years that people’s security is a reflection of state security.  Yet, Hudson et al.’s work really only looks at 1) women’s insecurity, not all people’s, and 2) the developing world with a problematic focus on countries with a high Muslim population.  They even argue that domestic abuse in the US is really constrained to the African-American sub-culture.  This is patently nonsense.  Ten million Americans reported domestic abuse in 2010; these people come from a wide variety of ethnic and socio-economic backgrounds.  That Hudson et al. did not link this level of interpersonal violence in the US to the US’ heavily militarized culture is weak scholarship.  But what all of these numbers and anecdotes speak to is US’ serious problem with violence and it is not just violence against women—it is a violence against subalterns.  Of the ten million who reported domestic abuse, for the first time ever, men out-reported women as victims: six million men reported being victims of abuse.  Men who do not receive the help they need because authorities remain (epistemologically) blind, for the most part, to men who are victims of domestic violence.  Additionally, the military assaults were against men and women.  We as a society are complicit with violence against subalterns.

On some level, we are all Medea.  We hold the light that saves those in power.  We help them find their golden fleece day-after-day, generation-after-generation.  When we argue that it is acceptable to heroize or romanticize men like Jason, Heathcliff, Edward, or Christian, we are killing this generation and the next (and not just our girls).  We continue to tell them power-over in relationships is not just fundamental and tacitly acceptable, but that it is romantic and desirable.  It conveys the notion that dominance in romantic relationships is exciting, fun, and reasonable.  (And, again, this is separate from BDSM.  The problems in Fifty Shades happen outside of the bedroom and between unequals.)  It sends mixed signals and feeds into the rape culture that exists everywhere.  It has been so easy for those in the West to look at the current events in India and say ‘we’ are not ‘that.’  And this bias is so deeply mistaken.  Yet, the bias is embedded with surprising insouciance in Hudson et al.’s work.  What the Department of Defence report demonstrates is that unequal relationships of power—between dominants of any gender and subalterns of any gender—plays out in sexual violence in the US military.  The statistics on domestic violence reflect that this same system of violence plays out in the home across the US and across demographics.

Thus, we are teaching the next generation that gender stereotypes of subaltern feminine submissiveness and passivity and dominant masculine aggression and dominance, whether they are performed by men or women, are valid.