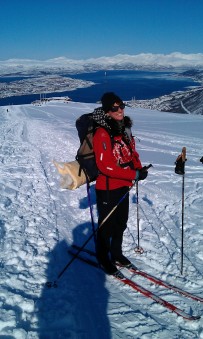 You have everything. You grew up in a good (great) neighbourhood (and you didn’t even know it then). Your parent’s were supportive (if you ignore the old fashioned European 1960s expectations that you should follow in their gendered footsteps). You were bullied for your physical appearance and ethnicity, but these had to do with awkwardness and height and being non-english, nothing more. You have attained the highest levels of education (not without a struggle, you are not the smartest, but still you managed). You have a full-time job now. Relationships have not been your strong suit and that second divorce nearly nailed you to a wall, but you have what it takes don’t you? You have everything, you get through it. You are supposed to get through it.

But what if you don’t all the time? Your benefits ensure that you are stronger than most, that you have the tools in front of you to get by, if not thrive and achieve. But what if you fail? What if you disappoint? What if you just can’t do it that day, that month, that year, that period of life?

People are counting on you. You will be judged (and are). That is ok because you have the power to get past that. Or that is what is expected. And while you are at it, you need to not only ensure that you use the tools afforded to you (how dare you not), but you have to recognize your benefits/privilege and fight for those who do not have the same – but do not speak for them by the way because you know not of what you speak. You have everything.

But don’t let anyone down either along the way. You got this far, you look strong to us, your own struggles (they are small – look at everything you have) are not our concern and it is weak to even suggest that you have them.

And you want/try to be a part of a bigger “we”, a team that struggles in solidarity (or so it is claimed), you want to support, you want to show that you understand and will fight along side (but not dominate), will speak but not speak for anyone (not yet sure how to do that but figure it out), you need to stop the silence but are scared to break it (you will be judged and you know that but you are tough and have the tools – you have everything).

That team you want to join (you never really fit well on teams before) – boy they have nice things to say, don’t they? They understand. They say so. And I have everything – I am white, I am educated, I have my experiences of white, female oppressions, I have read the literature (or I am trying to keep up, really I am), I am ready I should belong here shouldn’t I?

Why is this such an uncomfortable place? Why do I feel more pressure here to be “right” than anywhere else I have been? Why do I feel judged here? Why do I feel like – one wrong move and I could be stabbed in the back? Why does this place feel hostile to me?

I don’t know. The logic of the place attracts me, the team members . . .. . . I don’t belong here. There is something about me that does not measure up. I haven’t figured out what it is yet, but it is there.

So I will back away. I will watch from the sidelines (as I usually have done). I just hope the people I work with (cool cool people, tough and strong and living in parts of the world that is so empty of “everything” . . . .but they have a lot inside themselves still . . . . ) will not meet the people on this team. They will blow my cover – reveal I am a fraud in their eyes.

But actually . .. . . I do have opinions about that team. Yes, some people there are truly great – but as a collective? As a unit? They suck. They claim to fight against patriarchy but they are one of its biggest paragons. Half of those women have no idea what it is like to balance job and family and hell what if there is a problem in your personal life? No woman – suck it up like a man. Pretend life’s petty little problems do no matter to you and you can still publish 5 books next week plus pull out a great conference out of your ass  – because you rock, you rule, and you are doing it like it should be done (like a man). It is the land of Mad Men but with something lumpy in the suits.

And what – we expect this gang to understand privilege? They drive the discussions, they decide what we can talk about (and what we shouldn’t), they pretend solidarity but don’t know the meaning of the word.

What if, in the end, you are smart, you are engaged, you want to talk about lots of things, but you also want a friend? A real friend. You can be yourself. You can be a bag of contradictions. You can have everything but still be a loser and a mess. And that is ok. Where is that space?

Where are the truly safe spaces to talk? To stop being silent? Where you are allowed to ask (stupid?) questions about other people’s experiences and ask how to best support their cause, their fight, even if you can never experience things as they do?

Silencing and being silenced happens in so many ways. You can feel you have no voice even when you have everything. And perhaps because you have everything. Then you should just bloody well shut up, shouldn’t you because what really do you know? And yet you are wrong for being silent because then you are complicit. Silence does not always mean complicity, but it can be hard to argue otherwise. Silence might not mean “I have nothing to say” but that “I don’t know what to say”.

Of course, most of us have a lot to say. But it is not just about that. We tread across ethnic and racial boundaries, and particularly in being white and all that that entails (power, history), the line between dominance/condescension and support can be very thin indeed.

When a white person speaks for herself is she really doing so or is she suddenly perceived as speaking for someone else? Someone who she thinks does not say it as well? Someone she feels needs some help to speak? Or rather, do other people think she is doing so (speaking on behalf of others inappropriately)? How can she speak with others, rather than for others? And if she tries to speak with, is it perceived as such?

I would say no. It is for this reason safe places to speak are so necessary – for she/you/me who has everything, and those who have . . . . . everything understood in a completely different way? I have everything as “everything” understood according to white, middle class, heterosexualized, anglocentric standards. The dominant standards to which all is measured? But it is not everything, in the end. It misses so much.

6 responses to ““You have everything” ?”